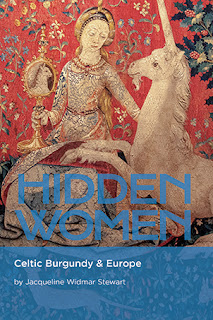 This second book of the HIDDEN WOMEN series focuses on women and one of the main Celtic families from the Iron Age.  The Burgundians’ major role in defeating Roman invaders and their preservation of secular art and ideas are only two of their immense contributions to civilization.  With the Franks, they combined to lead Celtic Europe during the Merovingian and Carolingian eras.

The Burgundy name still relates back to wine production and trade in the Rhineland.  Weaving together archaeological evidence and current associations allows an astonishing look at this distinguished Celtic European family. 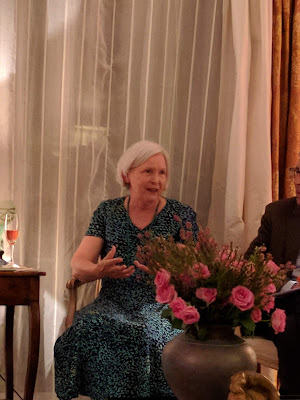 A Literary Salon in Paris

“In our era when the voice of women is challenged across all
Continents, the Celtic world, where women led major roles in politics,
trade science, agriculture, culture, religion, art and participated actively
in the life of cities, bears great significance.

In her book Hidden Women, Jacqueline Widmar Stewart
offers archaeological evidence, photos of sites and extracts of ancient
texts (even though biased as written by victors ) to help us
gain insight into the lives of women in pre-Roman Celtic Europe –
Burgundians, Franks, Galls, Basques, Veneti, Parisii. . .

To impose a new order, the Roman empire destroyed Celtic culture,
burnt scriptures, works of arts, towns and monuments and more
significantly, established segregation between sexes, weakened families,
and subjugated women.  From being equal partners of men, with the
advent of Christianity, women came to be regarded as evil, temptresses,
witches, usurpers of masculine power, creatures to be tamed and
relegated to only certain functions.”

Posted by Jacqueline Widmar Stewart at 6:59 AM No comments: 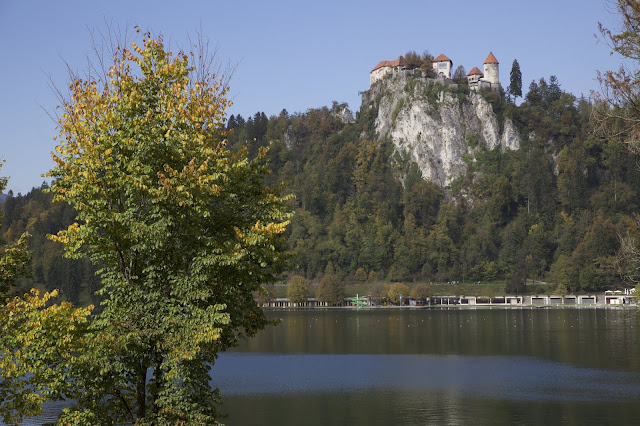 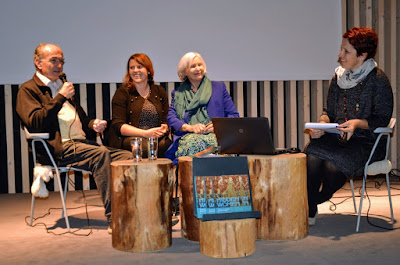 Posted by Jacqueline Widmar Stewart at 2:39 PM No comments:

All hail to you, mothers of eld
Hail to your sons and your daughters.
All of them breathe because of you
They owe their strength to your power.

You are the ones who protected their world
You built the Europe of yore
Though conquerors claimed it
and many defamed it
Your wisdom and leadership soared.

You have borne the families here now
You fled with forbearers and hid them
You fought to the end, defended the fort
All while you nourished and led them.

Too long you’ve stayed buried down deep
Away from the knowing eye,
Kept from your place up here in the sun
Where lineage live now and thrive.

Posted by Jacqueline Widmar Stewart at 6:44 AM No comments: 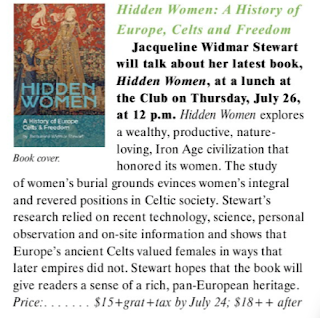 Posted by Jacqueline Widmar Stewart at 4:47 AM No comments: 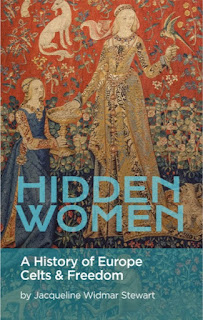 Stewart’s advocacy is powerful and practical and is synchronized perfectly with the voices of today calling out for change."

"With multi-disciplinary evidence and a persuasive voice,
Stewart calls out the domineering historical legacies of conquerors and of religion that have sought to silence the stories of women. She argues elegantly for women without the shrill overtones of desperate anger that conservative critics might dismiss. Stewart’s tone will appeal to all readers of history as she celebrates Celtic women and connects their legacy with present-day social issues. Stewart, not content to merely criticize, offers solutions to the problems women face because of historical misrepresentations, inaccuracies, and the inheritance of patriarchy.
Read the entire review at
http://www.theUSreview.com/reviews/Hidden-Women-by-Jacqueline-Widmar-Stewart.html
Posted by Jacqueline Widmar Stewart at 12:32 AM No comments: 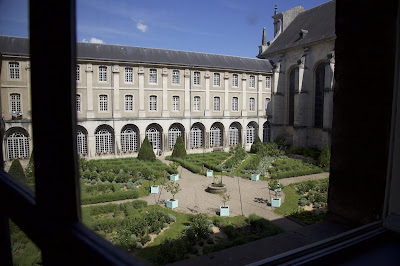 Hurrah!  An abbey where women are welcome again!

Starting off the first night in an abbey in a factory town in eastern France set the tone for our entire 2-week trip.  Abbaye Prémontrés sits on the Meuse river just across the water from a distinctive triangular square.  The Abbaye has returned to community use through a foundation that runs it, with its rooms buzzing once again with seminars and festivities.  The evening we happened to be there coincided with the opening of the fragrant gardens that graciously extend the interior spaces.

Had we known at the beginning of our trip what we formulated by the end, we would have tried to visit the Celtic festival hall.  One of the lessons from this trek around northern Europe is that even the smallest Celtic villages often contain festival halls.  Repurposed as Christian churches, some of these makeovers leave few traces of the old origins, especially when the stones have been whitewashed and a predominance of religious artifacts installed. That’s not always the case, though, because some retain their Celtic ways.  The ceilings, arches, medallions, reliefs that top of pillars, and sometimes even the windows carry forward ancient symbols and styles.  Occasionally the bright colors and designs remain on the ceiling beams, pillars and murals.  When women are portrayed as graceful, joyous, or warriors, it is a good bet that they are Celtic.

More soon.  Thanks for checking in.
Posted by Jacqueline Widmar Stewart at 9:15 AM No comments:

You are cordially invited to visit our new website,
complete with 2 short videos.
Kudos to Remy Steiner for superb design and
to Peter Brown for expert videography. 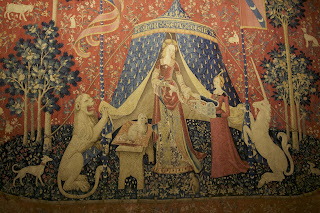 http://hiddenwomenbooks.com
Posted by Jacqueline Widmar Stewart at 7:35 PM No comments: 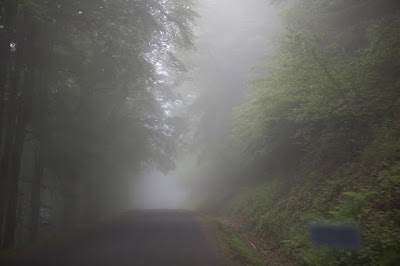 Posted by Jacqueline Widmar Stewart at 9:50 AM No comments:

Delightedly announcing that
Hidden Women: A History of Europe, Celts and Freedom
is a finalist for the Eric Hoffer Montaigne Medal award 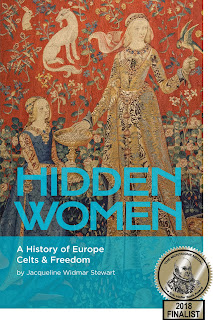 http://www.hofferaward.com
Posted by Jacqueline Widmar Stewart at 1:41 PM No comments:


A History of Europe Celts and Freedom.

New finds call for another look at women in European history. Ever more convincingly, buried treasures show that Europe’s ancient Celts valued females in ways that later empires did not.  Archaeology is uncovering vast differences between these family-centric populations and the Roman Empire that fueled its expansion by conquest, occupation and enslavement of Celtic peoples.  Over the past 2000 years, institutionalized sexism has carried Rome’s elitist male domination all the way to the present.

Along with the riches that have been found in women’s burial chambers, excavations across the continent reveal a surprising consistency in technological capabilities, communication and trade networks of Iron Age Celts. Ancient tombs and treasure troves throughout Great Britain, Belgium, France, Luxembourg, Germany, Switzerland, Czech Republic, Austria, Slovenia give insights into a formerly vibrant culture that is no longer recognized.
Hidden Women brings vantage views into this wealthy, productive, nature- loving, Iron Age civilization.
“Tracking pre-Christian ancestors has revolutionized our understanding of Europe and woven together loose threads that have made no sense,” according to Jacqueline Widmar Stewart.  “The greatest bonus is that we now feel connected all over Europe - wherever we travel, we are at home.  We hope that the book will give readers the same sense of a rich, pan-European heritage - and help give Celts their due.”

HIDDEN WOMEN:  A History of Europe, Celts and Freedom
By Jacqueline Widmar Stewart

Why is this book important? What does it tell us that we didn’t already know?
This book analyzes the causes of sexism in a new way, from the vantage point of knowing that 2000 years ago women were revered in society.
Another revelation is that before Europe was divided it was connected.  Knowing that makes it possible to detect who benefited from chopping up the continent.
A third reason is the sense of relief at knowing that our ancestors were not roving ravagers clubbing each other.  We have just scratched the surface in determining the scope of innovation and achievement in the Iron Age.  With scientific advances. discoveries are possible on a scale that has been unthinkable in the past.

Why did you write this book?  How did the book come about?
You have to understand my background.  All four of my grandparents immigrated from Slovenia.  How they could they leave this enchanted land?  I’ve tried to figure it out through law, language and literature, architecture, archaeology and genetics.
What literary devices do you use to convey your ideas?
In HIDDEN WOMEN, I’ve used an ancient technique of Boethius and Petronius called prosimetric which combines prose and poetry.  Photographs carry the narrative, perhaps even better than words.

Celts in Europe?  Weren’t they in Ireland?
Celts are in Ireland, Scotland, Wales and England but they were all over Europe too. France, Belgium, Spain, Germany, Switzerland, Austria, Hungary, Slovenia.  Finds from the Iron Age demonstrate the vast territories inhabited by Celtic people because they carried the technology of making iron and steel across Europe.

This book spans thousands of years and an entire continent.  Isn’t that too much to take on?
I consider this approach to be essential.  By looking across many lands and centuries, consistencies emerge that would not be noticeable on a smaller scale, This becomes all the more critical in the absence of the entire secular record.

What’s been the biggest surprise from conducting your research?
My biggest surprise is the beauty of the Iron Age world.  I have always loved medieval tapestry and illuminated manuscripts, and I see that our ancestors shared those passions for nature-based art too.

Who stands most to gain from your findings?
Of course, women will benefit, but so will society as a whole.  Our values have been knocked so far out of whack for so long.  Once family reassumes its place as the highest priority, everyone across the board will benefit, but especially the children.


Posted by Jacqueline Widmar Stewart at 8:42 AM No comments: