A Fabled Day at the Tuileries


The sun streamed through the crevices of a cloud-laced sky on the Sunday of the book signing in the Tuileries.  To the left, just inside the gates from the Place de la Concorde, two rows of tables stretched under a large white canopy.  The first book to catch the eye from the book stacks on the tables happened to be none other than the Parks and Gardens in Greater Paris!  What a superb surprise!

For the entire afternoon torrents of people swept through the gates, frequently spilling over between the tables.   The authors were seated on the outsides of the tables so we could talk easily with those passing down the aisle between the two rows of books.  I had the good fortune of sitting next to an amiable Parisian who has been photographing European gardens since he retired from his day job.  Now he is working on a project in Italy about gardens acquired in the early 1900's by Americans who then gifted them to various American Universities.  It will be very interesting to see this next book of his.

Inside the book boutique, down the three stairs and at the end of the vaulted ceiling, a mural of live plants and flowers decorated the entire back wall.  Here two of us were invited to present our books to the 20 or so people who gathered there.  I screwed up my courage and gave five minutes in French and five in English.

What a dream to be in the first public park in Paris, and not only that but one that survived intact all the way from the 17th century!  The director of the bookstore, under the auspices of Parisian museums, reigned over the event as a gracious host, conferring on the event a festive air in the grand, age-old tradition of book fairs.  With the sparkling view of the Arc de Triomphe and the Tour Eiffel lending a mystical quality to exchanges with passers-by, time seemed to vanish.  Soon as afternoon’s flashing lights faded to twilight’s soft glows, a few of us pulled away from that enchanted venue and continued on to the following phase.

Around the Place de la Concorde no taxies were in evidence, and it took several seconds to notice – to our great delight - the few little tuk-tuks clustered at the square’s edge.  We ended up riding, open-air and bouncing all the way along the cobblestones, across the bridge and down the street for the 3-4 blocks to a restaurant where we were joined
• by our publishers who had come by train from Stuttgart to Paris
• another author writing a book on modern Parisian landscapes for them
• our great friends who have just retired from the City of Paris parks department and land office
• the charming author of Versailles garden books who was hired by our friend when she worked for the City of Paris and who introduced us to bookstore director,
• the bookstore director herself, and
• a wonderfully humorous friend from Passy in the 16th arrondissement.
The vivacious young woman who organized last year’s Stanford Alumni gathering in the Rodin Gardens for my Parks and Gardens in Greater Paris was supposed to join us; sadly she had fallen ill.

Our friends had taken care of arrangements with the restaurant so that everything ran perfectly.  Glasses of champagne came first accompanied by "amuse bouche."  At the table the language-based seating plan proved to be important to the overall conviviality - French to French only - German to German/English, English/French - German/French, and so on.  Trying to figure that out felt like solving the Rubics cube, but all our revelers seemed to be happy to end up where they did, thank heavens!

The restaurant has the feel of old France to it, un-rushed, hospitable and friendly.  Because our friends have brought groups to dine here for years -especially when they were both working for the City of Paris - the service couldn't have been more cordial.  Friendly, accommodating and joking back and forth, the ambiance felt like a cozy dinner at home except that someone else was doing all the work.  Several guests at other tables were there to celebrate anniversaires and everyone joined in to serenade "happy birthday" at least twice, with all the waiters ringing the celebratory tables.

If reluctance to leave is any evidence of a party's success, a happy hesitance hung in the air as people left.  After everyone else had gone, we ended the evening by enjoying the afterglow with our friends for just a few minutes more over yet another glass of sparkling water.  Still rubbing our eyes, we're not sure this day really happened. 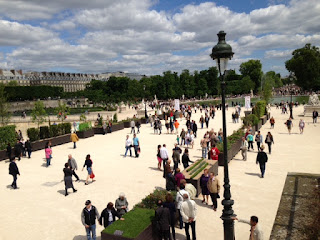 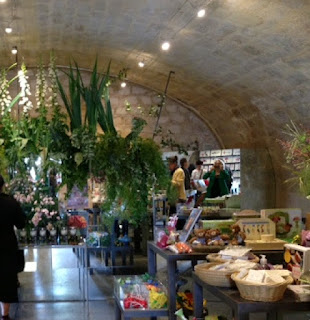 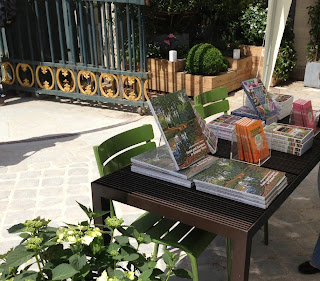 Posted by Jacqueline Widmar Stewart at 9:26 AM No comments: