As darkness fell, a contingent of literary aficionados made their way along the path to a cozy park café.  Raindrops pelted gently against the glass walls as I began my talk by discussing the role of artists in parks in and around Paris.

The museum and gardens that feature the famous sculptor’s works in the 7th arrondissement had not sprouted by happenstance.   It is thanks to Auguste Rodin’s vision and generosity that this extraordinary property has been preserved.  Once the City of Paris had acquired the beautiful Hotel Biron early in the 20th century, Rodin proactively leased it and installed his artwork.  He also arranged that the entire project –both museum and gardens of his masterful sculptures – would remain public.

Rodin’s home and workshop was not situated in Paris itself, but in the small town of Meudon, just south of Paris.  This charming home and adjoining workshop surrounded by gardens too has been protected due to his own planning and organization.

A Stanford alumni group led by the dynamic Maria Adle Besson sponsored the event in the Rodin garden café.  How delightful to give a presentation on my Paris parks book right in the middle of one, to such an enlightened group, and all on a rainy eve.
Posted by Jacqueline Widmar Stewart at 11:33 AM No comments:

Posted by Jacqueline Widmar Stewart at 4:49 PM No comments: 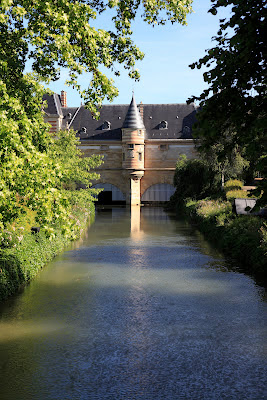 
It gives me great pleasure to announce the publication of my new book.  Here is the catalog entry by Edition Axel Menges at axelmenges.de:

Within the last millennium France’s Champagne region has ascended two stunning pinnacles of fame and fortune with a long, deep gorge between them.  In this book Jacqueline Widmar Stewart traces the history and culture of its highly varied past to its remarkable present.  More than 100 color photographs provide a visual perspective, especially to events and occurrences tied with specific locales.

The beauty of Champagne’s medieval buildings evidence a time of great opulence and artistry.  Today the bustle and vigor of the area’s hubs attest to the immense success of the modern champagne trade.  Generally speaking, however, less attention tends to focus on the tenor of the times between two eras.  Undeniably the deleterious effects from the periods that followed Champagne’s medieval golden age render recent accomplishments all the more impressive.

Nothing less than a tornado of ill winds swept the northeastern zone of France from its esteemed position in Europe and plunged it into fate’s dark abyss where it remained for hundreds for years while misfortune reigned.  The rebound of the Champagne region has come from a most improbable place with an even less likely cast of characters responsible for its immense successes.

The elegance, the exuberance, the mystique – elements now synonymous with champagne – developed through the union of art and craft with science and savvy.   Additionally, the process of champagne making - including the types of grapes, the terroirs, the crus, the development of the appellation system and other factors necessary for the designation “champagne” to be used on the label - are discussed in the book.  The author also looks at two regional parks in today’s Champagne region and the important, continuing role they play in the look, feel and function of the area.

Since high-school days in Indiana, French language and literature have held a fascination for Jacqueline Widmar Stewart, who studied at the University of Colorado as an undergraduate, gained her Master of Arts degree in French at the University of Michigan and earned her Juris Doctorate at Stanford University in Palo Alto, California.

All of the author’s books celebrate triumphs in conservation. In 2011 Edition Axel Menges issued her third book, Parks and Gardens in Greater Paris.  Her second book Finding Slovenia: A Guide to Old Europe’s New Country, published by Mladinska knjiga in Ljubljana, concerns the history and culture of her grandparents’ homeland.  Her first, The Glaciers’ Treasure Trove:  A Field Guide to the Lake Michigan Riviera, explores the geologic and philanthropic history of the five parks at the southern tip of Lake Michigan near Chicago, including the National Lakeshore.

Posted by Jacqueline Widmar Stewart at 4:38 PM No comments:

Greetings to you, Fair Readers,

February wanes even as its days lengthen,
And the spring unfurls with an array of new engagements.

Two of mine will take place in the Bay Area, one in the Windy City:
April 3 at 7:30 at the Tiburon Library;
April 17, noon, at the University Club of Chicago;
May 17, 6 p.m. at the Mechanics’ Institute Library in San Francisco.

All involve powerpoint presentations on Parks and Gardens in Greater Paris – the penultimate place for spring engagements, n’est-ce pas?

Wishing you the best of the season,
Jacqui

Posted by Jacqueline Widmar Stewart at 9:33 AM No comments:

Here's wishing you a superb 2012!  May it bring peace and prosperity to all.

Rebecca Wallace at the PA Weekly has written a wonderful article regarding my up-coming January 7th reading.  Twenty percent of purchases made from 3-6 p.m. at Books Inc on the 7th will be donated to East Palo Alto Kids Foundation.  A group of inter-community volunteers, EPAK makes small grants directly to teachers for their specific classroom needs.
For the whole story, visit   http://www.paloaltoonline.com/weekly/story.php?story_id=16117

p.s.
Books Inc is at 74 Town and Country Village, El Camino and Embarcadero
Posted by Jacqueline Widmar Stewart at 6:35 PM No comments: